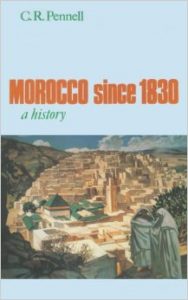 The first general history in English of Morocco in the nineteenth and twentieth centuries, Morocco since 1830: A History explores the profound changes that have affected social relations in Morocco over the last 150 years, especially those between the sexes, and between linguistic identities and cultures.

Although the country has returned to roughly its pre-colonial boundaries, Morocco still suffers from the effects of colonization by France and Spain. Its current king, like the sultans of the nineteenth century, claims legitimacy through his leadership of the Islamic community, but there is a long tradition of dissent based on Islamic ideals. Morocco’s history is also marked by the enduring presence of a large Jewish community.

This comprehensive portrait examines the tactics used by Moroccan rulers to cope with European penetration in the nineteenth century and colonialism in the twentieth, and, since the 1950s, to retain control of the independent state. As Pennell points out, however, the ruling dynasty is not sufficiently representative of modern Morocco, nor are political events the only influence on change. Most Moroccans are still poor, and their lives are shaped by their economic circumstances. The influence of harvests, access to land and water, and external trade have always determined the fate of the majority.

nextModern Algeria, Second Edition: The Origins and Development of a Nation