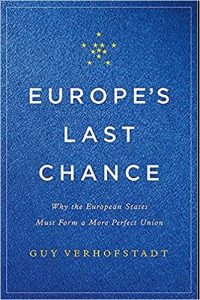 Europe is caught in its greatest crisis since the Second World War. The catalog of ills seems endless: an economic crisis spread through most of Europe’s Mediterranean tier that has crippled Greece and driven a wedge between northern and southern Europe; terrorist attacks in Paris, Cologne, Brussels, and Nice; growing aggression from Russia in Ukraine and the Baltic states; and refugees escaping war-torn neighbors. The European Union’s inability to handle any of these disasters was a driving factor in Great Britain voting to leave, and others may soon follow. The result won’t just be a continent in turmoil, but also a serious threat to American and British security-the Atlantic, let alone the Channel, simply isn’t big enough to keep European troubles in Europe. For everyone’s sake, Europe must survive.

The question is how. In Europe’s Last Chance, Guy Verhofstadt-former prime minister of Belgium and current leader of the liberal faction in the European Parliament-provides the essential framework for understanding Europe today, laying bare the absurdity of a system in which each member state can veto legislation, opt in or out of the Euro, or close borders on a whim. But Verhofstadt does not just indict the European Union, he also offers a powerful vision for how the continent can change for the better. The key, argues Verhofstadt, is to reform the European Union along the lines of America’s federal government: a United States of Europe strong enough to stand with the United States of America in making a better, safer world.

A visionary book from one of today’s luminaries of European leadership, Europe’s Last Chance is a clarion call to save the European Union, one of the world’s greatest chances for peace and prosperity.