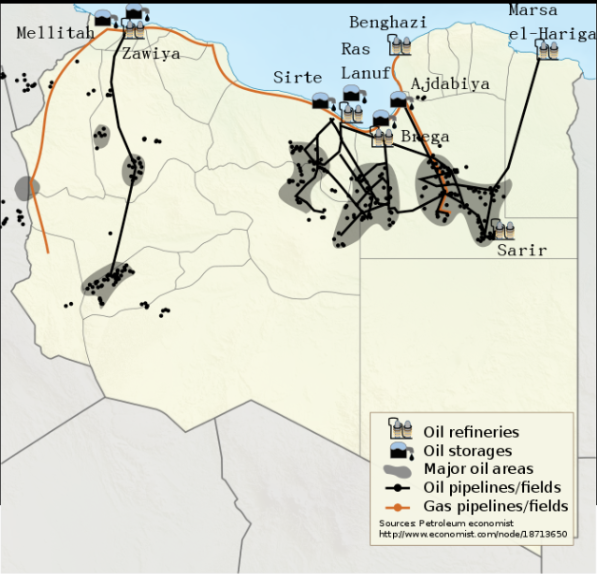 END OF OIL BLOCKADE IN LIBYA

The head of the Libyan National Army (LNA), General Khalifa Haftar, whose troops, with help from affiliated groups, blockaded Libya’s oil ports in January, announced the end of the blockade on September 18th.
On September 15th, NOC lifted the force majeure on the Zueitina port after seeing “significant improvement in the security situation that allows the National Oil Corporation (NOC) to resume production and exports to global markets.”
“The ports of Hariga, Brega and Zueitina are therefore classified as safe ports. The remaining oil fields and ports are being evaluated according to the safety and security standards in force in the national oil sector,” NOC said.
This is not only an economic progress for the northern African nation, but an important evolution in the internal conflict between UN supported government and Gen. Khalifa Haftar’s troops.
The significant improvement in the situation of Libyan conflict is underlined, and somehow validated, by the former UN special envoy for Libya, Ghassan Salamé. He appeared optimistic about the peace negotiations in Libya, considering that “the situation has never been so propitious for a solution of the Libyan crisis”, according to his statement on October 13th.
Salamé’s statement appears to be reinforced by the recent events in Libya. Oil production has been allowed to resume at Libya’s Sharara oil field, the country’s largest, amid an international push toward a cease-fire in the war-torn country.
Libya’s National Oil Company (NOC) said Sunday (October 11th) it was lifting its force majeure on Sharara, a move welcomed by the United Nations.
The resumption is the latest sign that the two main sides in Libya’s civil war are willing to cooperate on trust-building measures amid a UN-led push toward an enduring cease-fire.
In control of a majority of the country’s oil fields and enjoying the support of Russia and the United Arab Emirates, eastern Libya’s Gen. Khalifa Haftar declared an oil blockade in January, costing both sides billions of dollars in oil revenue as his year-long offensive against Tripoli faltered.
Following calls for a cease-fire and a UN-led push for dialogue, Haftar agreed to a temporary resumption of production last month. In return, the NOC said it would lift its force majeure on oil facilities not occupied by militias or foreign mercenaries.
Talks between the two sides wrapped up in the Egyptian resort town of Hurghada late last month with praise from the United Nations.
With US diplomatic support, the UN-led cease-fire initiative has included the prospect of a demilitarized zone along the Sirte-Jufra line that divides the rival sides.
The significant breakthrough registered in the economic field seems to be followed by a political and military consensus. At least for now, the two parties of the conflict are willing to open the way for negotiations instead of fighting. Military representatives of the two sides are set to meet in Geneva on October 19th. The first meeting of the United Nations’ Libyan Political Dialogue Forum, consisting of selected participants who are to disavow political ambitions in any future government, will begin early next month in Tunisia, the United Nations stated on October 10th.
The Tunisia summit will aim to lay groundwork for unifying the Libyan governments and pave the way for “the holding of national elections in the shortest possible time frame,” according to the United Nations.
The recent economic advancement appears to be a very important and long awaited signal of possible reconciliation between the belligerents in Libya. It is crucial to see if the current progress is to be followed by reasonable solution or a significant improvement of the situation in the region.