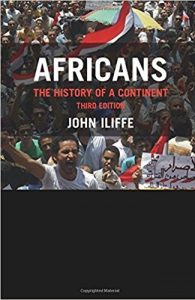 In a vast and all-embracing study of Africa, from the origins of mankind to the present day, John Iliffe refocuses its history on the peopling of an environmentally hostile continent. Africans have been pioneers struggling against disease and nature, but during the last century their inherited culture has interacted with medical progress to produce the most rapid population growth the world has ever seen. END_OF_DOCUMENT_TOKEN_TO_BE_REPLACED

In this global era, Central Asia must be understood in both geo-economic and geopolitical terms. The region’s natural resources compel the attention of rivalrous great powers and ambitious internal factions. The local regimes are caught between the need for international collaborations to valorize these riches and the need to maintain control over them in the interest of state sovereignty. Russia and China dominate the horizon, with other global players close behind; meanwhile, neighboring countries are fractious and unstable with real potential for contagion.
This pathbreaking introduction to Central Asia in contemporary international economic and political context answers the needs of both academic and professional audiences and is suitable for course adoption.

The “dean of Cold War historians” (The New York Times) now presents the definitive account of the global confrontation that dominated the last half of the twentieth century. Drawing on newly opened archives and the reminiscences of the major players, John Lewis Gaddis explains not just what happened but why—from the months in 1945 when the U.S. and the U.S.S.R. went from alliance to antagonism to the barely averted holocaust of the Cuban Missile Crisis to the maneuvers of Nixon and Mao, Reagan and Gorbachev. Brilliant, accessible, almost Shakespearean in its drama, The Cold War stands as a triumphant summation of the era that, more than any other, shaped our own.