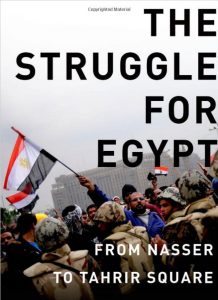 The recent revolution in Egypt has shaken the Arab world to its roots. The most populous Arab country and the historical center of Arab intellectual life, Egypt is a linchpin of the US’s Middle East strategy, receiving more aid than any nation except Israel. This is not the first time that the world and has turned its gaze to Egypt, however. A half century ago, Egypt under Nasser became the putative leader of the Arab world and a beacon for all developing nations. Yet in the decades prior to the 2011 revolution, it was ruled over by a sclerotic regime plagued by nepotism and corruption. During that time, its economy declined into near shambles, a severely overpopulated Cairo fell into disrepair, and it produced scores of violent Islamic extremists such as Ayman al-Zawahiri and Mohammed Atta.

In The Struggle for Egypt, Steven Cook–a Senior Fellow at the Council on Foreign Relations–explains how this parlous state of affairs came to be, why the revolution occurred, and where Egypt might be headed next. A sweeping account of Egypt in the modern era, it incisively chronicles all of the nation’s central historical episodes: the decline of British rule, the rise of Nasser and his quest to become a pan-Arab leader, Egypt’s decision to make peace with Israel and ally with the United States, the assassination of Sadat, the emergence of the Muslim Brotherhood, and–finally–the demonstrations that convulsed Tahrir Square and overthrew an entrenched regime.

Throughout Egypt’s history, there has been an intense debate to define what Egypt is, what it stands for, and its relation to the world. Egyptians now have an opportunity to finally answer these questions. Doing so in a way that appeals to the vast majority of Egyptians, Cook notes, will be difficult but ultimately necessary if Egypt is to become an economically dynamic and politically vibrant society.

nextOn the State of Egypt: What Made the Revolution Inevitable