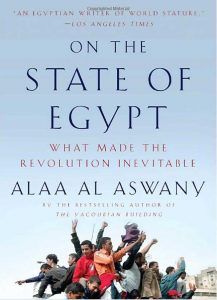 “Alaa Al Aswany is among the best writers in the Middle East today, a suitable heir to the mantle worn by Naguib Mahfouz, his great predecessor.” –Jay Parini, The Guardian (UK)

From one of Egypt’s most acclaimed novelists, here is a vivid chronicle of Egyptian society, with penetrating analysis of all the most urgent issues—economic stagnation, police brutality, poverty, the harassment of women and of the Christian minority, to name a few—that led to the stunning overthrow of the Mubarak government. Al-Aswany addresses himself to all the questions being asked within Egypt and beyond: who will be the next president, and how will he be chosen in a land where heretofore only simpletons, opportunists and stooges involved themselves with elections? What role will the Muslim Brotherhood play? How can democratic reforms be effected among a people used to such contradictions as the religiously observant policeman who commits torture? In a candid and controversial assessment of both the potential and limitations that will determine his country’s future, Al-Aswany reveals why the revolt that surprised the world was destined to happen.

“[The] star of a new generation of Egyptian novelists.” –The Independent (UK)

previousThe Struggle for Egypt: From Nasser to Tahrir Square

nextEgypt: The Moment of Change