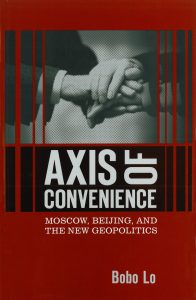 Few relationships have been as misunderstood as the “strategic partnership” between Russia and China. Official rhetoric portrays it as the very model of international cooperation: Moscow and Beijing claim that ties are closer and warmer than at any time in history. In reality, however, the picture is highly ambiguous. While both sides are committed to multifaceted engagement, cooperation is complicated by historical suspicions, cultural prejudices, geopolitical rivalries, and competing priorities. For Russia, China is at once the focus of a genuine convergence of interests and the greatest long-term threat to its national security. For China, Russia is a key supplier of energy and weapons, but is frequently dismissed as a self-important power whose rhetoric far outstrips its real influence.”Axis of Convenience” cuts through the mythmaking and examines the Sino-Russian partnership on its own merits. It steers between the overblown interpretation of an anti-Western (particularly, anti American) alliance and the complacent assumption that past animosities and competing agendas must always divide the two nations. Their relationship reflects a new geopolitics, one that eschews formal alliances in favour of more flexible and opportunistic arrangements. Ultimately, it is an axis of convenience driven by cold-eyed perceptions of the national interest. In evaluating the current state and future prospects of the relationship, Bobo Lo assesses its impact on the evolving strategic environments in Central and East Asia. He also analyzes the global implications of rapprochement between Moscow and Beijing, focusing in particular on the geopolitics of energy and Russia-China-U.S. triangularism.

Written by a well-known authority in this area, this book demonstrates that, unlike in other regions, such as East Asia, geopolitics has been a critical factor in driving globalization in the Middle East. The author argues that whereas elsewhere globalisation has opened up the economy, society, culture and attitudes to the environment; in the Middle East it has had the opposite effect, with poor state formation, little interregional trade, foreign and interregional investment, and reassertion of traditional identities.

This book explores the impact of globalization on the polities, economies and social environment of the greater Middle East, in the context of the region’s position as the central site of global geopolitical competition at the start of the twenty-first century.

‘Fear’ has greater currency in western societies than ever before. Through scares ranging from cot death, juvenile crime, internet porn, asylum seekers, dirty bombs and avian flu, we are bombarded with messages about emerging risks. In response, patterns of living and working are increasingly regulated. This book takes stock of the range of issues of ‘fear’ which have come to public and academic attention in recent years, and presents new theoretical arguments and new research findings on fear, covering topics as diverse as the war on terror, the immigration crisis, stranger danger, global disease epidemics and sectarian violence.To date, previous social science engagement with fear has taken two largely separate trajectories: fear in everyday life, and political geographies of fear at global and national levels. This book is the first to put forward a conceptual framework which emphasizes the connections between geopolitics and everyday life. It examines the ways in which fear may be manufactured and manipulated for political purposes and becomes a tool of repression, and charts the association of fear discourses with particular spaces, times and sets of geopolitical relations. But it also highlights the importance and sometimes unpredictability of lived experiences of fear – the many ways in which fear is made sense of, managed, resisted and reshaped, as well as the importance of hope and resistance in everyday life. It relates fear closely to political, economic and social marginalisation at different scales, and explores the more complex social identities and relations of which fear becomes a part

China is rising. But how should the West – and the United States in particular – respond?
This could be the key geopolitical question of the twenty-first century, according to strategic expert Hugh White, with huge implications for the future security and prosperity of the West as a whole. The China Choice confronts this fundamental question, considering the options for the Asian century ahead.
As China’s economy grows to become the world’s largest, the US has three choices: it can compete, share power, or concede leadership in Asia. The choice is momentous – as significant for the future as any the US has ever faced. China is already more formidable than any country the US has faced before – and if America does not want to find itself facing China as an enemy, it must accept it as an equal partner.
Weighing the huge difficulties of accepting China as an equal with the immense cost and risks of making it an enemy, in the end the choice is simple, even if it is not easy. The US simply must share power with China in Asia. The alternative is too terrible to contemplate. 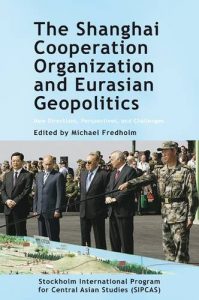 The Shanghai Cooperation Organization (SCO) has developed into a key regional
security group in Asia, its member states representing no less than “half of
humanity”. Alarmists believe that the SCO is making itself into a NATO of the
East, thus posing a long-term threat to the West. Moreover, several members are
key players in economic development and energy production, hence political
developments within the SCO can no longer be ignored by the global market. Even
so, the organization has long been disregarded by political leaders in the West
and is seldom reported in Western media or analysed in academic works. As such,
this ground-breaking volume – the first study to properly treat a key regional
grouping in Asia and with contributors from across the region and beyond – will
be a key reference for many specialists and academics working on Asian affairs.