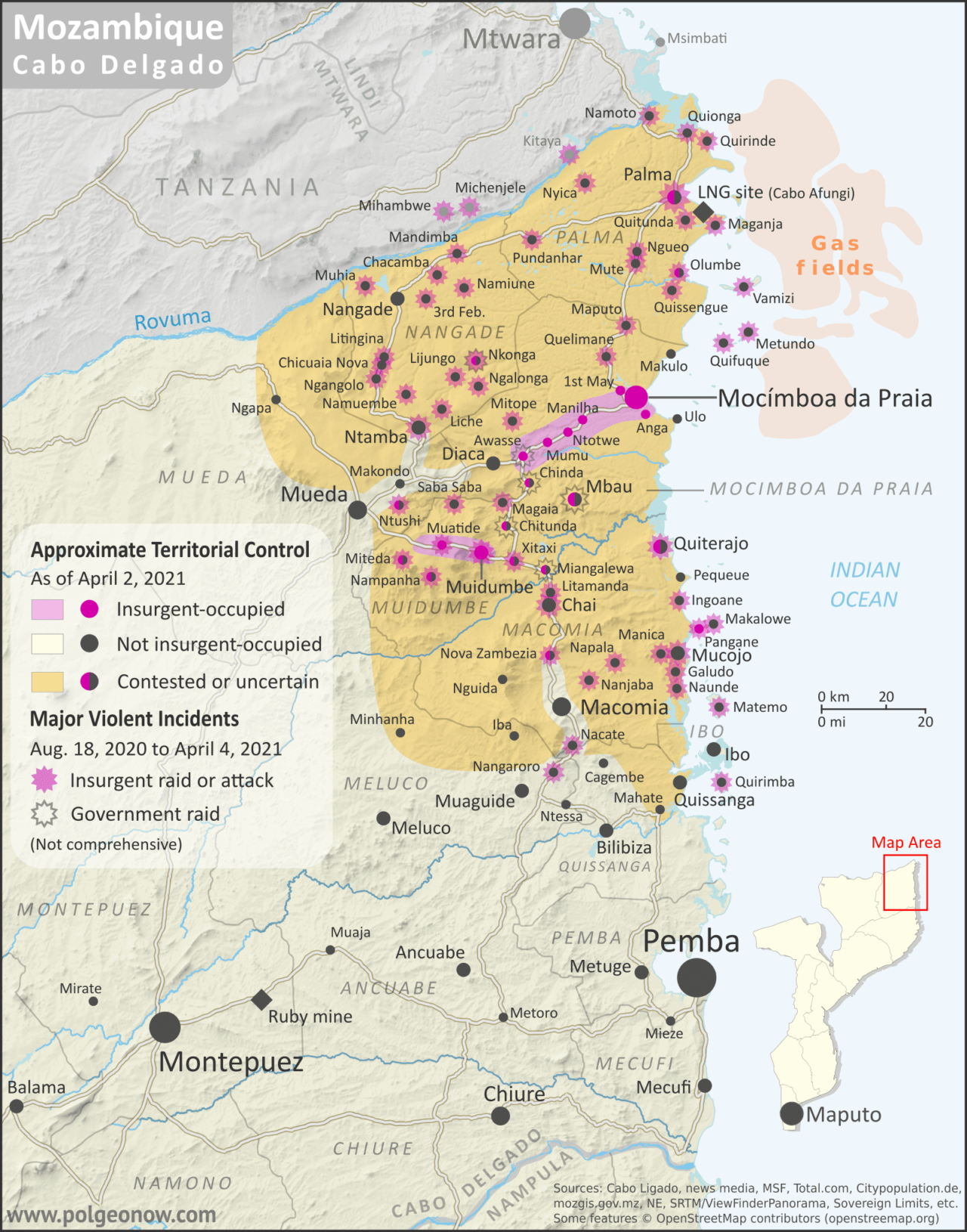 Since 1975,when they gained independence from  Portugal, the people of Mozambique have hoped to evolve into a  democratic state in which every citizen has rights and their basic necessities, as food, will be fulfill by the authorities.

However, in 2021 Mozambique is threaten by an invasion by jihadists insurgents, who want to establish a new stronghold in this state.

Since 2017, the situation from this country is known world wide as the Cabo Delgado insurgency. Here, in one of the major city of the country, the jihadists, manly members of Ansar al-Sunna, a native extremist faction with tenuous international connections, fought the security forces in an attempt to establish an Islamic State in the region

Along with Ansar al-Sunna, in mid-2018  it began its expansion in Mozambique the Islamic State of Iraq and the Lev.nt (ISIL), which carried out numerous attacks against the security forces, becoming one of the most feared faction active from this state.

Numerous organized crime gangs carrying out criminal activities in Mozambique have also taken advantage of the precarious security situation, being aware that the authorities are concentrating their efforts on combating terrorist groups.

The main terrorist group from the country remains Ansar al-Sunna which is known as al-Shabbab (it doesn’t have any connections with the Somali based terrorist group with the same name). The members of this faction are mostly Mozambicans, but also from Kenya, Tanzania and Somalia.

The group claims that Islam as practiced in Mozambique has been corrupted and no longer follows the traditional teachings of Muhammad and the Qu`ran, and not infrequently, its members stormed mosques where, under the threat of death, they led people to adopt a radical Islam.

Their actions target any man who doesn’t have extremist views, no matter if he is a Muslim, a Christian or a Jewish.

Over time, the group became increasingly violent: It called for Sharia law to be implemented in the country, no longer recognized the Mozambican government and started to form hidden camps in Macomia District, Mocímboa da Praia District, and Montepuez District, where the militants were trained by ex-policemen, and ex-frontier guards who had been fired and held grudges against the government. The group begun to rise and started to cooperate with others jihadist organizations from the region. Although, the organization doesn’t appear to be very cohesive, but is dived into several cells that operate in different districts of the country.

Although the organization`s propaganda is based on religious ideology – Islamic extremism, analysts say that the main factors behind the group`s expansion are the problems and shortcomings to which Mozambicans citizens are exposed.

The social, political and economic problems that are facing the state to which is added a rate o unemployment among youth, making joining the terrorist group the best solution for survival…..