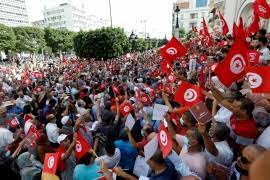 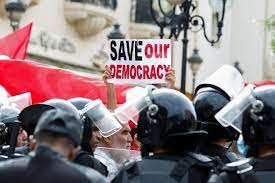 In May 2022, the peaceful political movement against Kais Said continued and on Sunday, 15 the opposition leaders and supporters gathered in the street of Habib Bourguiba, but this time to clearly ask the Tunisian President to leave his position.

Invited by the National Salvation Front and the Coalition of Citizens against the Coup, thousands of Tunisians manifested against the ongoing regime, and its performance. People called the current president Kais Said to „Degage” which brings the image of the 2011 revolution manifestation that asked Ben Ali former president to leave his position. Demands were mainly a better economy as Tunisian as struggling to cover their daily living.

Kais Said who planning to draft a new constitution and have a referendum for the people to pass it, is continuously being opposed by the people themselves for not involving any party in his decision. The fact that he froze the activities of the parliament and dissolve of the Supreme Judicial Council, is not good sign for democracy path in Tunisia.

Kais Said was elected in the presidential elections with 72,71% of Tunisian votes, marking the highest as a candidate was elected after the revolution in September 2019.

However, with the accumulation of events, and with his decision that is described as non-democratic like frozen the activity of the Parliament, and dissolving the Supreme Judicial Council. Moreover, the president assumes full executive and legislative powers in July 2021.

Today Kais is losing support and allies even from the closest. We take few examples of his counselors and people who were among his team and resigned claiming that he does not involved them in his decision.

Foreword, the situation is still critical and the peaceful demonstrations can turn into some violent protests, so the political scene of Tunisia, remains one of the hot point of the MENA crises.

Why are the elections from Libya postponed?